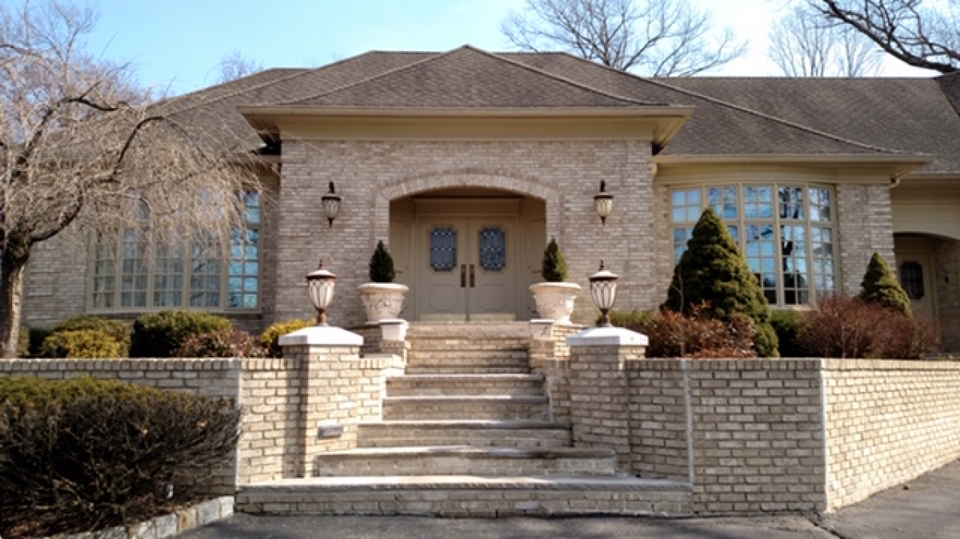 Tony Soprano’s house is up for sale, starting at $3.4 million. You know what that means: HGTV is staking out the house in an unmarked van, laying low until its time to initiate a sting called “Operation Overpay.” That’s where the network swoops in at the last minute, knee-capping all bidders to score this big prize. Just a hunch.

We’ve seen this rerun before. It’s The Brady Bunch playbook. Well-meaning suckers up the ante, only to be outbid by corporate suits looking to exploit the famous estate rather than live in it. And who wouldn’t accept the highest bid?

Publicity hiked The Brady Bunch house value from $1.89 to $3.5 million, so perhaps The Sopranos estate owners would like some fame inflation too—since their house is twice as large. Maybe that’s their long-game strategy.

The Sopranos house is familiar to fans of the classic HBO series which ran from 1999-2007. It’s perched high atop a cul-de-sac with a long, sloping driveway where ratty-robed mob boss Tony Soprano (James Gandolfini) risked getting whacked every time he scooped up his morning newspaper.

The cloistered North Caldwell, New Jersey estate was prominently featured in the show’s opening credits, as Tony’s SUV cruised working-class neighborhoods en route to his own upper-class safe haven, which he shared with wife Carmela, daughter Meadow and son A.J. Here, Tony and Carmela’s explosive domestic disputes earned the actors seven Emmy Awards. The backyard is where Tony suffered panic attacks, tossed Carmela into the pool, and obsessed over ducks wading in that pool. David Chase (Soprano’s creator), what did that mean?

The real life Sopranos house is actually owned by Victor and Patti Recchia, who have lived in the 5,600-square-foot residence for 32 years. Victor, owner of Fourth Generation Construction, built the elevated estate and several other homes in the neighborhood.

“I’m proud of its meticulous construction,” he says. “I am grateful for the years of joy, shelter and great delight this home has given our family and friends over the years.”

Spanning 1.5 acres, the estate is still made for a boss, with traditional 80s-ish interiors, four bedrooms, four full bathrooms, a powder room, and twin two-car garages big enough for Escalades and Suburbans. There’s also a detached one-bedroom, family-and-friends guesthouse where the Christophers and Bobby Baccalàs in your life can crash.

The majestic great room boasts a vaulted octagonal ceiling, grand chandelier, white stone fireplace, marble-countertop bar, and four-sets of French doors opening to the pool and cabana patio where A.J. (Robert Iler) was threatened by a black bear in an episode.

The kitchen charms more than the bland TV version, upgraded with white stressed cabinets, built-in fridge, and stainless steel appliances surrounding the eat-in island. The formal dining room has a tray ceiling and a storage column from which Carmela (Edie Falco) pulled a rifle to defend against a suspected intruder. The family room has built-in cabinets, a stone fireplace, a skylight, and a Sopranos poster signed by cast and crew.

“The cast and crew were always thoughtful and respectful of our home, helping us create such wonderful memories,” says Victor. “Among them, filming an actual bear in our backyard. His name was Bonkers and he had a trainer next to him).” Bonkers isn’t the best name for a bear though, especially if you’re acting with it.

Diehard fans continue to visit the home, taking selfies—they’ve even called Patti “Mrs. Soprano.” When Gandolfini died in 2013, fans left flowers, candles and a bag dried ziti by the curb, The New York Times reports. Recently, a Maybach car with tinted windows was reportedly spotted parked outside the Recchia home. Was it an HGTV exec, a potential buyer or merely a curious, wealthy fan?

The Recchia home is a pop culture curiosity. More than 150 homes were scouted for The Sopranos. The production reportedly filmed at the home 30 to 50 times, including the pilot episode. Later, interior scenes were shot in Queens, New York at Silver Cup Studios (the same sound stage as HBO’s Sex & The City), which constructed replica interiors of the Recchia home.

Initially, the Recchias were in Sopranos mode—not talking (unless it was The New York Times, which had an exclusive). I wondered if the venerated newspaper sent over Silvio, Paulie and Christopher to “encourage” that coveted interview? Then I remembered, they’re make believe.

Since I live 15 minutes from The Sopranos house, I considered ambush journalism—driving by, pushing my way past the Sopranos stalkerazzi to leave a horse’s head by the curb. Maybe that would get me the interview? But I’ve simply watched too many mob movies and TV shows. Emailing Victor was more practical, for which he kindly obliged days later.

This house bidding begins at $3.4 million. The New York Times reports property taxes are $34,005, (the extra $5 likely tacked on because in Jersey, everyone takes a cut). The Recchias are selling their home unconventionally—without a real estate broker and via email. They’re only considering serious bids with proof of funds at [email protected] until June 21.

But the Recchias’ For-Sale-By-Owner strategy is risky. Real estate experts say brokers are an invaluable source to guide sellers and buyers through this complicated task.

“People who sell on their own usually aren’t successful because they’re not knowledgeable about the sales process, and they price their house too high,” says Peggy McLaughlin, broker for ERA Justin Realty in New Jersey.

The Recchias’ ask price is significantly higher than similar properties in the area, which typically sell between $1.5 million and $2 million. Real estate site Zillow values their home at $1.63 million. But for now, the Recchias are banking on intense media exposure—or an HGTV sale and cameo.

HGTV renovated The Brady Bunch house into a new pop-culture-home improvement show (A Very Brady Renovation, featuring The Brady Bunch cast). What if the Sopranos cast got in on this new trend? Could HGTV make Chase an offer he can’t refuse (I can’t help it)?

Ultimately, the Recchias will bank big coin and priceless memories—via their ties to one of America’s iconic TV shows.

“While famous estates get major media exposure and widespread recognition, getting attention from possible buyers is only a portion of what the sales process entails,” says Sally Forster Jones, who sold Los Angeles’ [Aaron] Spelling Manor for $85 million in 2011. “That being said, it is crucial to always work with a reputable agent.”

Agreed. But if not, call in Silvio, Paulie or Christopher. They’ll get the job done too. As for the Recchias, don’t stop believin.’

Although I write about the surreal, I keep it real.