THE MOST EXCLUSIVE PROPERTY IN ALL OF LOS ANGELES

THE OWLWOOD ESTATE IN HOLMBY HILLS 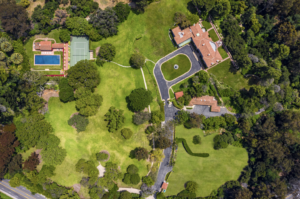 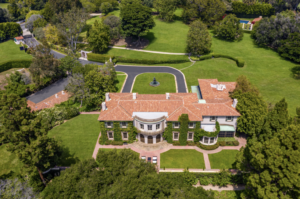 The Owlwood Estate, built in 1936, is arguably the most exclusive property in all of Los Angeles, if not the entire west coast of the United States. Situated on 10 manicured acres bordering the renowned Los Angeles Country Club, the estate is the largest property in Los Angeles’ most coveted and exclusive enclave, Holmby Hills. The estate is the location for our issue 13 cover shoot and effortlessly straddles the line between classical elegance and refined modernity. Throughout the decades, it’s been a stylish backdrop for some of the brightest Hollywood legends, so it seemed appropriate that we bring two legends of our own there – the ineffable Jon Hamm and the 1954Mercedes-Benz 300SL Gullwing.

“EACH AND EVERY VIEW ON THE 10 ACRE ESTATE EXUDES INTENT, DEFINING A THOUGHTFUL STYLE THAT EMBODIES THE SURROUNDING HOLMBY HILLS NEIGHBORHOOD.” 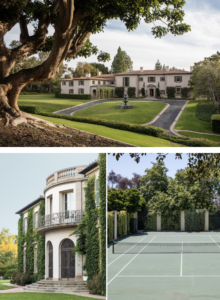 The estate, represented by Sally Forster Jones, Tyrone McKillen, Tomer Fridman of Compass, and Drew Fenton of Hilton & Hyland, is an iconic luxury property from the Viewpoint Collection portfolio and has recently been listed at $115,000,000. Designed by renowned architect Robert D. Farquhar, this 12,600 square foot mansion was once the largest private residence in Los Angeles. With every opening of the wrought iron floral gates, Farquhar’s studies in Italy and Paris become self-evident, embodied by a lavish fountain, impeccably manicured shrubbery and a Tuscan-inspired facade, that somehow blends into its surroundings as much as it stands out. Exterior balconies, framed by a two story wall of ivy, allow for views of the sprawling grounds that seamlessly pair modern American luxuries, like a tennis court and Olympic pool, with the style of Italian Renaissance villas. Each and every view on the 10 acre estate exudes intent, defining a thoughtful style that embodies the surrounding Holmby Hills neighborhood. 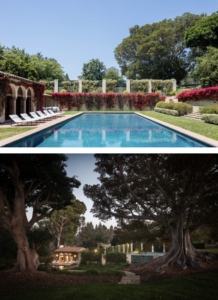 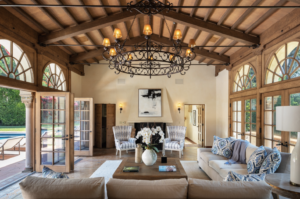 Venturing indoors, grand staircases of rich, paneled wood greet all who enter, setting an immediate tone of graceful luxury. By echoing the floral themes of the exterior gates and carvings, the house gently transitions one inside to a world of crystal chandeliers, detailed accent carvings, and intricate bannisters. Throughout the house, modern art is set within panels of ornate floral trim and above rich, marble fireplaces, creating comfort through thoughtful juxtaposition. Carefully selected furniture spans the last 100 years, bringing together classic influences from around Europe, offset against drapery and patterned rugs from around the world. Though awe-inspiring in its range, the house never ceases to be inviting, filling expansive sitting rooms and widely mirrored dressing rooms with a sense of carefully deliberated luxury. 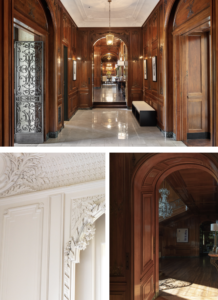 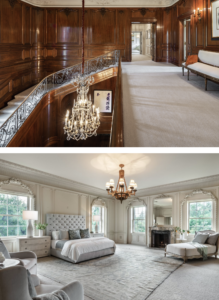 “MARILYN MONROE WAS A FREQUENT GUEST, WITH SOURCES AT THE TIME SAYING SHE VIEWED THE GUEST HOUSE OF THE EXPANSIVE ESTATE AS HER FAVORITE PLACE TO GET AWAY FROM THE HUSTLE AND BUSTLE OF LA.”

Unsurprisingly, this unique vision of modern luxury has drawn myriad notable residents over the decades. Initial owners included businessman Charles H. Quinn and subsequently, hotel magnate Joseph Drown, founder of the Hotel Bel Air. By the 1950s, Hollywood came to the Owlwood, when Joe Schenck, the first President of United Artists and chairman of 20th Century Fox bought the estate. During this period, it’s said that Marilyn Monroe was a frequent guest, with sources at the time saying she viewed the guest house of the expansive estate as her favorite place to get away from the hustle and bustle of LA.

Perhaps the most notable occupants of the Owlwood came into residency thanks to a chance encounter in the 1960s. By then, the estate was owned by renowned actor Tony Curtis, who threw a party in 1967 that would bring entertainers Sonny and Cher to the home. Smitten, they made enquiries to purchase, and were turned down until 1972, when Curtis was relocated to London to film, and their dream came true. The legendary entertainers filled the 40 rooms of the house with the best the world has to offer, including handmade Spanish rugs, French chairs, and porcelain Chinese vases, landing on the cover of Architectural Digest in 1974. They owned the house until they parted ways in the mid 1970s, with the house seeing a succession of owners including producers, international investors and even an Olympic athlete, since then. 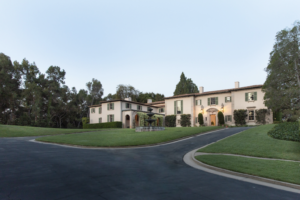 Cut to today and the Owlwood remains a luxurious backdrop for the rich and famous, hosting Grammy Awards parties for Jay-Z and most recently, our cover shoot with the equally grand, Jon Hamm. This Italian Renaissance landmark is a gateway to unparalleled luxury, and the teams at KAA and Meyer Davis have the vision to transform it into a modern day oasis for an aspirational, world-class residential development. Respectful blending of classic interiors with ultra-modern amenity spaces, the Owlwood Estate will merge a rich historical past with a performance driven modernity. Designed and Submitted for permitting, this sanctuary set within a lush verdant landscape is truly one-of-a-kind.