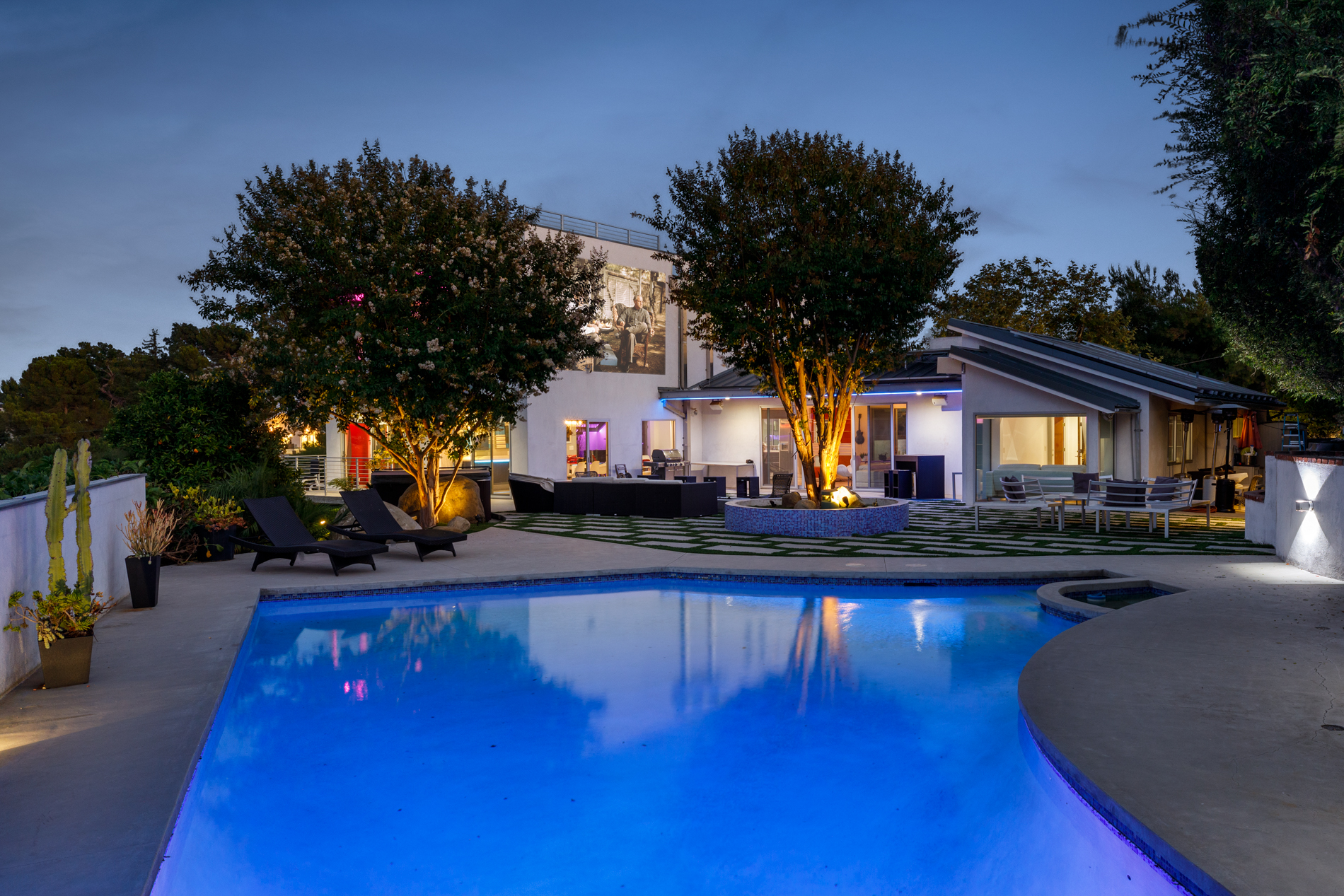 Though it might sound cliché for a record executive to live in a lavish home in the Hollywood Hills — where they host star-studded parties overlooking LaLaLand’s glimmering carpet of lights — that may be the only cliché about former Warner Bros Records staff producer Jeff Blue, who just listed his ultra-modern six-bedroom, five-bathroom Hollywood Hills home for just under $4.8 million. The veteran exec is hoping for better luck this time around, having previously listed the property two years ago at a loftier $5.2 million.

Blue’s bio reads like an dream-worthy resumé on a job listings website. Before signing and developing massive recording acts such as Linkin Park, Korn, Macy Gray and Limp Bizkit, he previously worked as a lawyer — yes, he’s passed the bar! — a music journalist, an actor, a musician and a songwriter. Unsurprisingly, guests to Blue’s not-quite 4,500 sq. ft. spread include a long list of music industry heavy hitters like Chance The Rapper, The Weeknd, Pitbull, Khalid, and Selena Gomez, though whether that celebrity pixie dust will help sell the property remains to be seen.

The gated, hilltop home enjoys panoramic views of the Hollywood sign, Universal Studios, Burbank and the craggy Verdugo Mountains. Like many of the other rooms throughout the house, the living room can be lit up disco-style with a comprehensive LED lighting system. A vaulted, exposed wood ceiling neatly contrasts with the gleaming white floor tiles, while a large, modern fireplace centers the room, and glass sliders to the backyard let in a brighter, more natural kind of light during the daytime. The white floor tiles continue into a separate dining room that features a floating, built-in buffet counter and floor-to-ceiling sliding glass doors with dramatic mountain vistas. A clean-lined exemplar of sleek utilitarian design, the kitchen sports lacquered white upper cabinets and chocolate brown lowers with snow-white quartz counters. Up-to-date designer appliances are complemented by two sinks that boast industrial-style goose-neck faucets.

Contemporary metallic railings reminiscent of a 1930s ocean liner border a floating natural-wood and steel staircase that leads upstairs to the master bedroom, which spills out through floor-to-ceiling windows to a couple of small balconies with huge views. The master bath is as sleek and contemporary as the rest of the house with a balcony of its own located just outside the oversized soaking tub.

Even the well-stocked gym has a terrific view, but the big draw is unquestionably a gorgeous swimming pool bordered by extensive terracing, a fire pit and, for night time ambiance, spot-lit trees. With off-street parking for ten or more vehicles, this is definitely an ultimate party home in the hills.