Rates for 15-year mortgages continue slow rise from prior lows

Mortgage rates have remained largely unchanged in recent weeks, aside from a gradual rise in rates for 15-year loans

The average rate for a 30-year, fixed-rate mortgage, meanwhile, remained at roughly the same levels as the previous week, jumping by a single basis point to 2.88 percent, according to Freddie Mac’s weekly lender survey.

“While the economy continues to grow, it has lost momentum over the last two months due to the current wave of new COVID cases that has led to weaker employment, lower spending and declining consumer confidence,” Freddie Mac Chief Economist Sam Khater said in a news release. “Consequently, mortgage rates dropped early this summer and have stayed steady despite increases in inflation caused by supply and demand imbalances. The net result for housing is that these low and stable rates allow consumers more time to find the homes they are looking to purchase.” 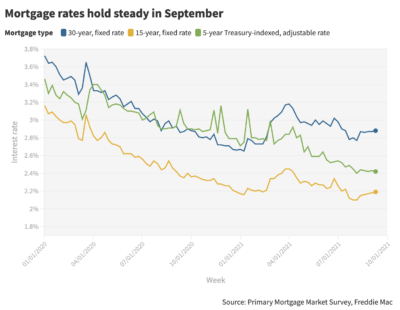 These rates are averages for borrowers with excellent credit who put 20 percent down on a home, according to Freddie Mac’s survey methodology. Borrowers with lower credit scores can expect to qualify for higher interest rates.

This slightest of changes in the average rate for 30-year loans continued a remarkably stable period for mortgage rates, with the previous five weekly averages ending up at percentage marks of 2.87, 2.86, 2.87, 2.87 and 2.88, respectively.

This period of stable rates were preceded by a jump around the time of a particularly health jobs report that was released in August. The next month’s report was more tepid, reflecting a slower hiring rate amid the spread of the Delta variant of the coronavirus.

Discussion and speculation followed in financial circles as the Federal Reserve has openly discussed scaling back the number of bonds it purchases on a monthly basis. Mortgage lenders appear to have largely shrugged off this talk for now, however, keeping rates essentially unchanged over the last five weeks.