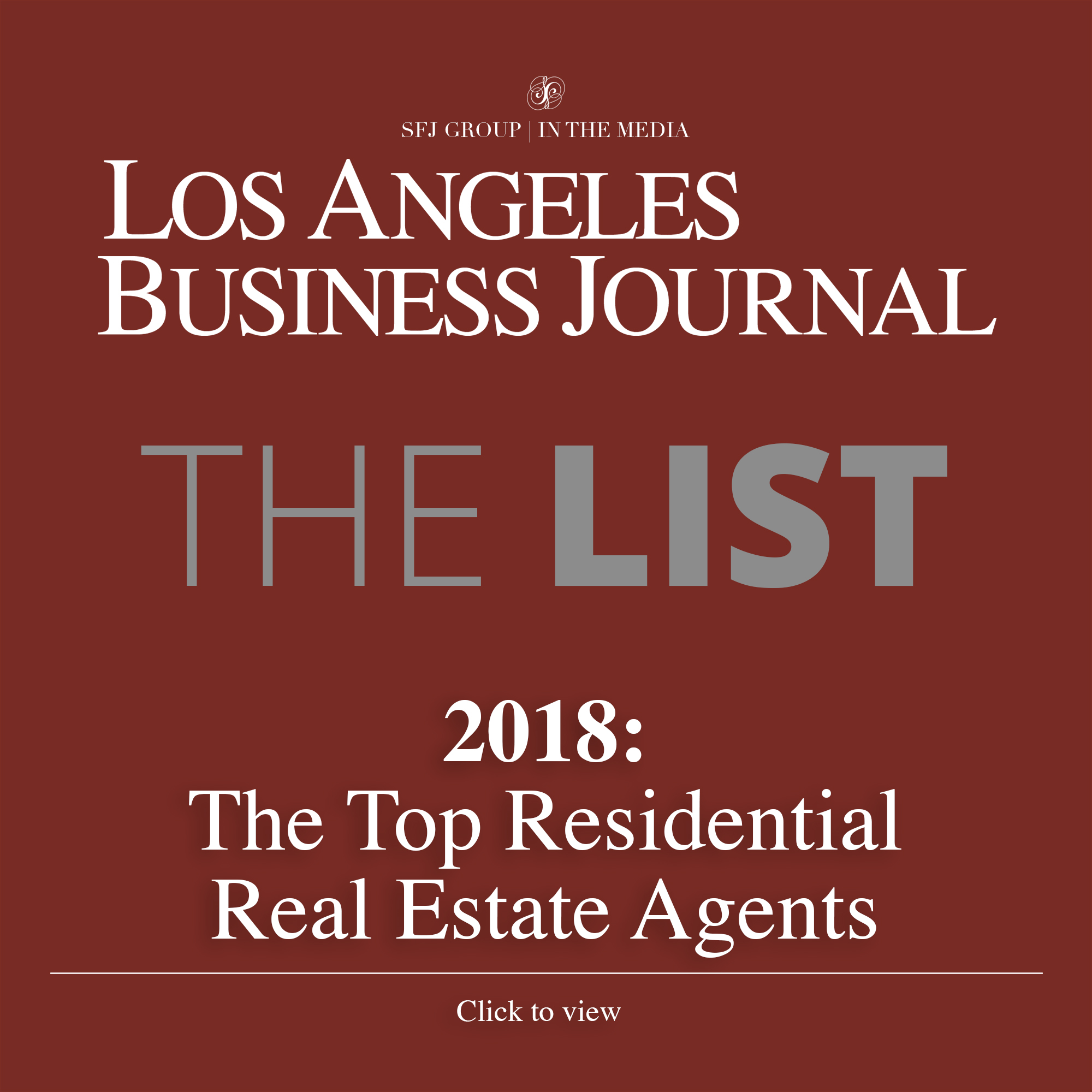 The slump was a microcosm of the overall 2018 Los Angeles residential real estate market, which started out strong but weakened as the year went on, especially in the fourth quarter.

The median sales price of homes during the fourth quarter of2018 was $1.5 million, down 1.6 percent quarter-over-quarter, according to a report from brokerage firm Douglas Elliman Realty. Closed sales were down 22.1 percent while days on the market were up 9.3 percent during the quarter.

Strand Hill Properties/ Christie’s Inter­national Real Estate Inc.’s David Caskey – who did $199 million in sales in 2018, down from $210 million in 2017, putting him at No. 15 on the Business Journal’s list – said inven­tory was also a factor.

“In 2018 we had a slowdown in the number of transactions, but we also had a decrease in available inventory,” he said. “Pricing didn’t change very much, but the number of deals was down about 25 percent.”

Agents agree, however, that there’s been an uptick in sales during the first two months of 2019.

“So far, it’s been very strong with a lot of activity,” Caskey said. “One of the best starts to the year, one of the best first quarters we’ve had in a long time. I’m anticipating a very strong market this year with price stability and transaction volume pickup.”

Most sales are coming from local buyers.

“Mainly we’re seeing people move around, buying up, or when the children have gone, buying down,” said Jade Mills, a broker at Coldwell Banker Residential Brokerage. Mills ranked No. 6 on the Business Journal’s list with $343 million in sales, up from $286 million the previous year.

“You have this influx of really wealthy CEOs and dot-com-ers who can pay any­thing,” she said.

Companies like Facebook Inc. and Google have all recently committed to growing their presence in L.A. High-ranking officials, Maize said, buy luxury property. As these companies fill more mid-level positions, she anticipates a lot of employees picking up $2 million to $3 million properties.

Tami Pardee, of Halton Pardee & Part­ners Inc., grabbed the No. 3 spot with $482 million in sales, up from $454 million the previous year. Pardee’s inclusion on the list is new after the Business Journal changed its list methodology to allow for brokers who have their names on a larger number of listings for their brokerage.

Sally Foster Jones, of Compass, claimed the No. 5 spot with $373 million in sales, up from $352 million the previous year. The sale increase bumped her up from No. 8 on last year’s list.

The biggest change from the 2018 list is the absence of Hilton & Hyland agents such as Rayni Williams and Drew Fenton, both of whom made the top 11 in 2018. The brokerage firm declined to provide sales numbers for its agents this year.

The Agency’s Mauricio Umanksy fell from the No. 3 to the No. 10 spot with $269 million in sales, down from $548 million the previous year.

Berkshire Hatha­way HomeServices California Proper­ties’ David Offer climbed 10 spots to No. 9 on this year’s list with $303 million in sales, up from No. 19 in 2018 with $198 million in sales.

Brokers on the list agreed that prices sellers wanted for their homes toward the end of 2018 were not in line with where the market demand was.

“2018 was a year of change for us,” Compass’ Kirman said. “It started out pretty strong. The last quarter was quite a difficult one. We started to feel the effects of a changing market. Buyers aren’t as interested in paying the prices sellers wanted, and sellers wanted prices from 2016.”

Mills said homes across many submarkets are now priced too high.

The Agency’s Santiago Arana, who was No. 7 on the list with $340 million in sales in 2018, down from $421 million in 2017, said the amount of overpriced product on the market caused concerns when sellers finally lowered prices.

“The reality is, finally those developers and sellers are becoming realistic,” he said. “The perception is the market is going down. In many cases, any good house that goes on the market sells quickly.”

One of the big questions in 2018 was how the Malibu fires would affect real estate. In November, the Woolsey Fire destroyed an es­timated 1,500 structures in the seaside enclave and surrounding areas.

In the wake of the fires nearby, rental markets saw increased demand, which pushed up prices in the market.

“All these people that were out of homes and had to go somewhere,” Maize said. “A lot of time, the lease markets are very quiet. That market ticked up in Santa Monica, Brentwood and Beverly Hills with all those people having to find new homes and having to find them fast.”

Coldwell’s Mills said she even sold a condo to people who will be rebuilding for the next few years.

“The Malibu market slowed down tremen­dously; nothing has been moving there since the fire happened, but it is now starting to pick up some activity,” Arana said. He added that the nearby rental market went through the roof.

Kirman agreed that rental markets saw an uptick but said the spike was largely over.

‘I’m seeing little effect at this point,” he said. “I think we’re back to normal. People who lost their homes are rebuilding. When you have buyers in very wealthy neighborhoods, people have the money to do something quickly.”