More of the city’s well-heeled are going vertical. And that means perks from the obligatory outdoor pool to the occasional zen garden.

For decades, high-end real estate in the city has been defined by privacy and space, the better for movie stars and Kardashians to retreat here. But luxury condos are becoming more of a presence, and the market is beginning to adopt an identity distinct from New York City and other vertical luxury hotspots.

Research by The Real Deal plus interviews with brokers active in the condo market reveal that certain amenities such as outdoor pools, fitness centers, security, and valets are almost standard when it comes to top-shelf product. But other high-end bells and whistles – like concierge service or perhaps pet salons – may not play as well on the West Coast.

Perks of the future

The small vertical luxury market in L.A. relative to the city’s wealth is part of larger, historic issues relating to residential development restrictions. However, city laws have changed in recent years to encourage housing density, and one consequence is that relaxed building and fire codes enabled more rooftop additions. 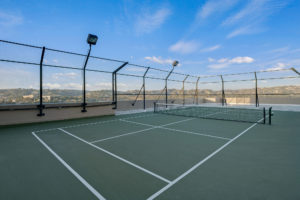 “I recently listed a penthouse condo with a private rooftop tennis court, which is pretty rare,” said Compass’ Sally Forster Jones, referring to the Grand in Westwood, which was built in 1980, with the court added by the previous owner of the penthouse property, who Jones did not identify.

Written by the TDR Staff